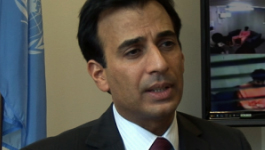 Mr.Craig Mokhiber, Director of the New York Office of the High Commissioner for Human Rights

Craig Mokhiber is Director of the New York Office of the High Commissioner for Human Rights. An international lawyer and specialist in human rights law, policy, and methodology with more than thirty-five years in the international human rights movement, including more than twenty-five years at the United Nations, he has held senior UN positions in Geneva, New York and in the field, and has undertaken human rights missions to dozens of countries across Africa, Asia, the Middle East, Eastern Europe and Latin America.

Mokhiber has served as the UN’s Senior Human Rights Advisor in Palestine, and in Afghanistan, led the team of human rights specialists attached to the High-Level Mission on Darfur, headed the Rule of Law and Democracy Unit, and served as Chief of the Economic and Social Issues Section, and Chief of the Development and Economic and Social Issues Branch at OHCHR Headquarters. He was for five years the Chairman of the UN Task Force for Action Two (a global initiative to advance national human rights protection systems), and later Chaired the UN Democracy Fund consultative group, the UN Working Group on Leadership, and the UN Consultative Group on Inequalities.